The Sakada Series (35min) is a series of three short films that captures the personal stories, struggles and successes of the Sakadas and of the Filipino-American second-generation in Hawaii, within a cultural and historical context.  Sakadas are Filipino contract workers who immigrated to Hawaii between 1906-1946 to work as laborers for Hawaii’s sugar and pineapple plantations.  The series aims to educate about an aspect of Filipino history in Hawaii, and to foster a deeper understanding of the Filipino culture within Hawaii’s multiethnic state.  The Sakadas are now a dying generation; they carry within them historical experiences and intrinsic Filipino values of hard work, close community and dedication to family that inspire, empower and build appreciation of the Filipino culture.  The Sakada Series poster v1, v2. 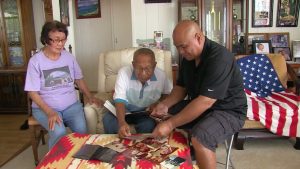 The first of the series, A Sakada Story (9:27min), was completed in April 2015.  A Sakada Story is the true story of Filipino plantation laborer Cipriano Erice, who immigrated to Hawaii in 1946 to work for Waialua Sugar Plantation.  As a kid growing up in the Philippines, Mr. Erice had worked in the fields and sought additional jobs so he could go to school; his dream was never fulfilled.  Coming from a poor family, he couldn’t pursue an education because his parents needed him to work. He says, “My father say, ‘You know how to write your name is enough.’ ”  Beginning by cutting grass and hauling cane at Waialua Sugar Plantation, Mr. Erice, through merit, landed a job in trade as a welder.  Tired of the inequalities within the plantation system, he joined the union and became a labor leader fighting for equal rights.  Through hard work and determination, he rose to the highest position of journeyman.  Now at the end of his life, Mr. Erice looks back at the most gratifying thing he has ever done – sending all of his children to college, proudly giving them the education he never had. [subtitled]

A Sakada Story poster, flyer (front) and flyer (back).

, Living Treasure (10:37min), captures the unique life story of Angel Ramos, who immigrated to Hawaii in 1946 to work for the Kahuku Sugar Plantation. Honored as a “Living Treasure” by the Honolulu City Council, Mr. Ramos regales us with his storytelling talent and rare personal photos and artifacts from his days on the plantation. [subtitled]

Stice, a second-generation Sakada descendant, who grew up in the pineapple plantation town of Lanai City in the 1940’s. The most heartfelt of all the films, Mrs. Stice’s story captures the much-needed second-generation and female perspective that has not often been documented. Holding true to the values her parents impressed upon her, Mrs. Stice paves her own path to attain an education, serve her country and raise a family, realizing through her experiences what it means to be a "Filipina".  Filipina poster.